Educator-in-charge Adam Brown provides an overview of the feedback in this subject.

What happens when an educator takes online feedback outside the learning management system and into the world of public social media?

This case shows how social media can be used to involve learners in ongoing feedback interactions with peers, educators and the community. In this second-year digital media subject, learners completed two assignments consisting of blog posts with different kinds of integrated media content, such as images, infographics and edited video. Throughout the teaching period, learners were engaged in ongoing feedback conversations through Twitter as well as comments on other social media sites like video-sharing sites and blogs.

Key features of this case study include: 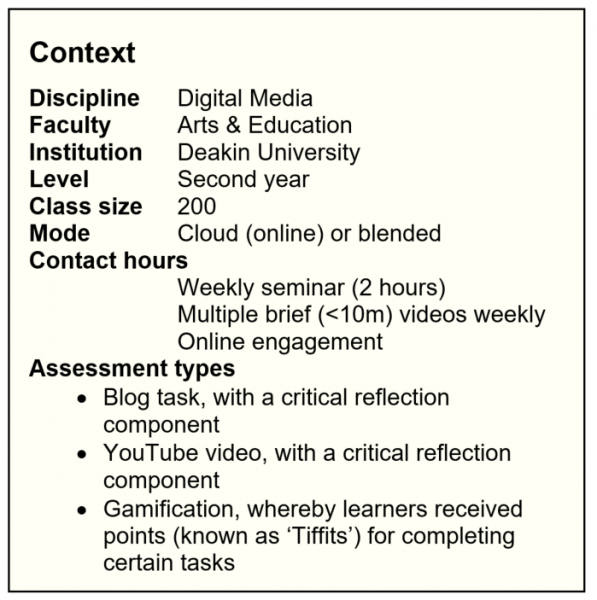 This subject taught digital media through digital media, adopting the educator-in-charge’s philosophy of “learning by doing”. Learners from across the university took the subject as an elective to learn and experience digital media, and develop their online identity.

The educator-in-charge had tried to get feedback conversations going inside the institutional learning management system, but found the tools did not support the immediate, rich conversations he wanted. In response, he moved much of the feedback to social media – predominantly a Twitter hashtag. In that hashtag, learners post tweets that link to their work-in-progress assignments (blog posts, online videos, etc.) and engage in brief feedback interactions. The social media accounts of members of the public, including industry practitioners, also engage in these conversations.

Getting learners to engage in this sort of informal feedback process can be hard. To encourage learners to participate on Twitter and elsewhere, the educator-in-charge implemented a gamified system through which learners earned points, which he called Tiffits (named after his canine companion Tiffany), for completing particular tasks. When learners post meaningful tweets they earn Tiffits, which unlock additional, non-essential subject content. The Tiffit system incentivises learners to participate, thus establishing a critical mass of communication early on in the teaching period. This early engagement helps to ensure learners remain engaged in the hashtag’s feedback interactions throughout the subject. Each teaching period there are thousands of tweets to the hashtag.

The subject features two major assignments. For the first assignment, learners create a blog post that creatively represents an element of their own online identity and critically reflect on this by applying theoretical concepts. Learners can share practice posts on Twitter by creating a tweet with a link to their blog, including the subject hashtag #alc203. Teachers and learners in the subject follow these links, and either leave comments on the blog itself or post a tweet about it.

Learners submit their completed blog to be formally assessed by a member of the teaching team – either the educator-in-charge or a sessional educator. Learners receive audio feedback comments on their blog from their educator, along with a completed rubric and mark. The audio feedback is relatively similar to Case Study 2, so it will not be discussed in depth here. Learners are not required to continue work on their blog past the submission date; however, many continue to write posts after their assessed post is submitted to further enhance their digital literacies and portfolios.

The final assessment task in the subject is creating an online video, which is embedded into a blog post with a critical reflection on the process and experience of making the video. Like the first task, learners are encouraged and motivated to practice relevant media-making (in this case, video-making strategies) by creating short clips and sharing them to Twitter for feedback.  Although the formal assessment tasks used different media types, they nevertheless overlap as they both address all of the subject’s learning outcomes. Learners report that they use what they learn in the first blog task to improve their work on their final assignment.

This subject involves extensive online interactivity. Learners and educators we spoke with told us that they often wake up to many notifications on their phones about new interactions on Twitter, such as people retweeting them or replying to their tweets. To make space for so much online interaction, the educator-in-charge has removed lectures from the subject, replacing them with several brief videos and podcasts each week.

This case represents an example of authentic feedback. As in authentic assessment, where assessment is meant to resemble the real-world application of a discipline, authentic feedback occurs when feedback practices within the university more closely match feedback practices of the discipline and related industries. The educators in this subject have implemented this by shifting feedback interactions to the spaces where digital media work happens: Twitter, video sharing sites, blog platforms, and other online locations. Rather than being monolithic and staged, feedback information in this subject is a continual flow of bite-sized tweets and comments. And rather than restricting feedback conversations to an educator and a learner, feedback takes place in the online public sphere. These are ordinary features of how digital media professionals engage in feedback, and by bringing them into the subject the feedback is arguably more authentic.

In this case, feedback was considered to be successful particularly because of the following key elements:

Educator-in-charge Adam Brown explains what worked in this subject and why.

Some of the enabling factors for this feedback design included:

Some of the challenges for this feedback design included:

What the literature says

This case contains elements of Boud and Molloy’s (2013) Feedback Mark 2. Boud and Molloy put forward a range of critiques of feedback practice, some of which are addressed in other cases. This case particularly addresses Boud and Molloy’s desire for learners to be agentic in feedback processes. In this case, learners are the key actors in the feedback process: learners share their work publicly and request feedback. Boud and Molloy also express concern that feedback is traditionally a unilateral act of communication from educator to learner; this case addresses that concern through involving a range of peers, educators, former learners and community members as active partners in a dialogic process of commenting about learner work.

The use of social media as a site for assessment feedback has not been explored in depth in the literature. Some existing studies have documented learners engaging in feedback conversations with members of the community, such as through learners making contributions to Wikipedia (Di Lauro & Johinke, 2017). However, in the broader higher education literature there are discussions of the use of these tools in teaching and learning.

This case offered several suggestions for educators wishing to trial the feedback design:

Due to the rapidly-changing nature of social media platforms, the best way to learn how to use a particular social media platform is to search for how-to guides for that specific platform. This will help to ensure you are using a current guide. To get some general ideas on the benefits of using social media such as Twitter and video-sharing, check the following links: